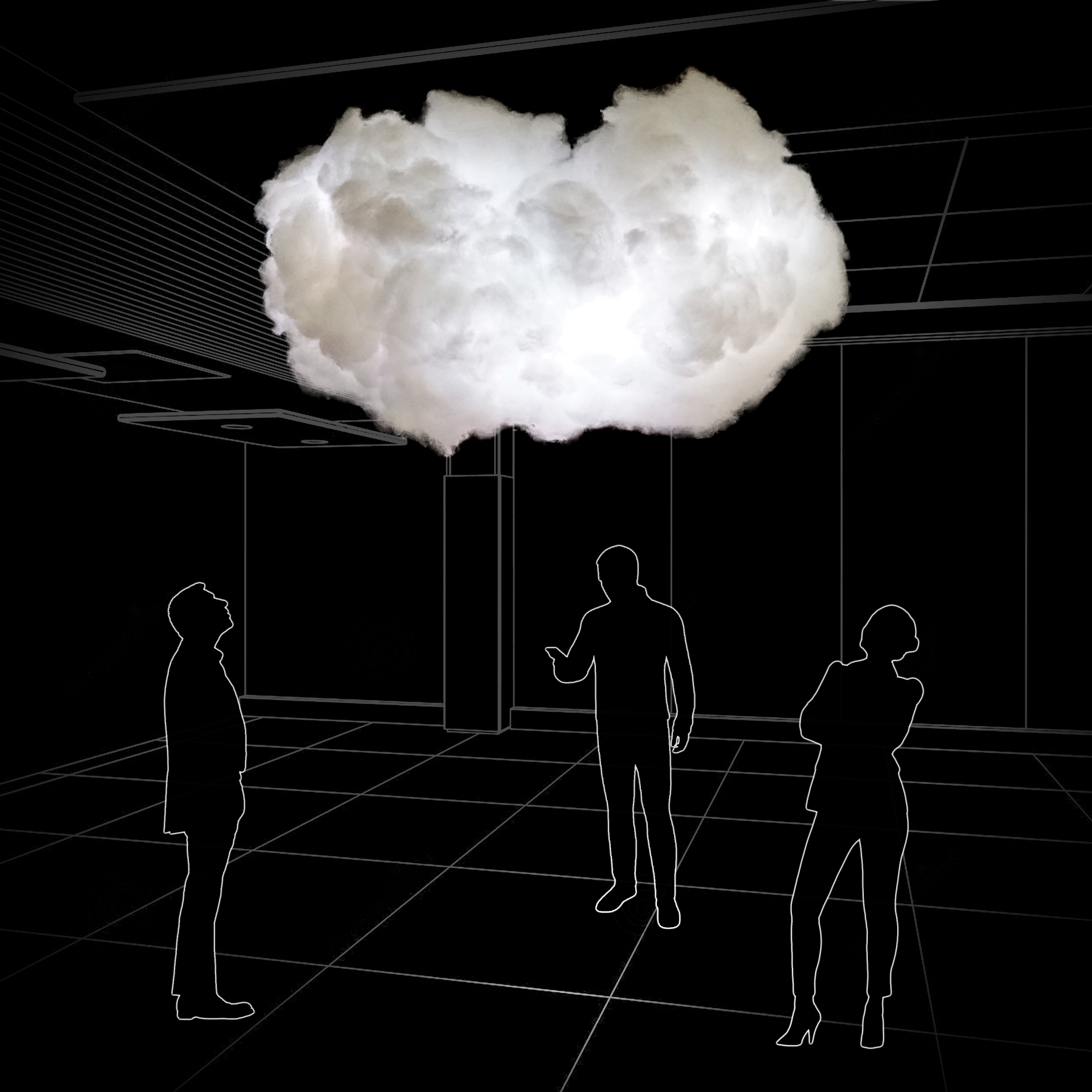 Nuvola, detector of atmospheric, social and existential, digital phenomena, it presents itself with a site specific, intelligent and interactive installation, which relates to the world and the surrounding space by communicating with the people, reacting to their sound inputs, lighting up in response to certain hashtags and cyclically revealing the mood of the world, to remind us how everything is connected.

Technological device / chimera, with a digital soul (which refers to the cloud) and the archetypal body of a cloud, reflects our gaze in balance between real and virtual that interpenetrate.

The structure of Nuvola is approximately 2 meters long, suspended about 3 m above the ground, it consists of an intelligent electronic core, equipped with sensors to perceive the surrounding environment, and which connects to the web to receive information and stimuli, to which it reacts by producing flashes and animations of light.

The purpose of this installation is to make visible the complex technological and social ecosystem in which we are immersed, which leads to the generation of an ever-increasing number of data and events, of whose implications we are not always fully aware.

Today, projected into a highly technological world, in which we are increasingly connected without touching each other, in which we are becoming more and more accustomed to strengthening our bodies, our being, with less and less physical supports, in which we are witnessing a fast and pervasive dematerialization of the elements of our daily life, today, at the same time, we find ourselves however in need of emotional, archetypal references to define the world we are designing. So we call memory that of computers, and (artificial) intelligence the machines’ incredible ability to analyze to which the research is increasingly focusing on. So we call cloud (in italian “nuvola”) that place not place that collects the data we generate and spread around the net. Cloud, Nuvola, incorporeal and light element, impalpable and yet concrete, multiform and shape-shifting, an element which has always been in our sky, which is our sky, an iconic symbol that defines it.

Nowaday it is more important than ever not to lose the perception, the awareness of the principle of cause and effect. The increasingly dense and “intense” connections that we are tracing with our “existence” on the net, are intangible, but their effects are real.

And then the cloud, Nuvola, becomes again a place where these data come – it is appropriate to say – to the light.

In creating Nuvola we wanted to play between form and content, in a two-way path of references between the ancestral archetype and the playful-functional element of the contemporary-future.

Therefore The Cloud (Nuvola) as form, as function, as language.

As clouds collect water vapor, grains of dust and sand, DNA of the world, they feed on them, aggregate them, combine them, transport them away and return them in the form of raindrops, to close a cycle that repeats itself endlessly, so Nuvola “feeds” on digital grains, bits, generated by the continuous exchange of information and data in which we are immersed every day and of which, by now, we have lost the perception.

The more refined and complex the technological implementation of this device, the simpler the shape that has been chosen to give it, with a game of references to the soothing world of childhood and imagination still not impervious to magic. The Cloud (Nuvola) chosen for its elementary and at the same time powerful symbolism, capable of transmitting concepts of immaterial, pervasive, mobile, like the virtual space in which we imagine our digitalpersonalities live

In addition to the “natural” form, also the language with which it was chosen to express Nuvola is typical of natural phenomena. The language of light is a language that can translate all the languages ​​of the world. Deeply understandable for anyone, without the need for superstructures or explanations, a language that expresses itself and modulates itself in speed, intensity, persistence, etc. A language that warns us of dangers or stimulates our feelings, which we have learned to decode for millennia, understandablebeyond any technological or cultural barrier: the warm light of a sunset, the frightening glow of a lightning during a storm speak to all of us, without mediation.

And again the light evokes energy and speed. The flashes that we observe during a thunderstorm are generated by electric discharges, flows of electrons, the same ones that travel through the cables of the interconnected world and which are the stuff digital data are made of.

Nuvola installation hosted at the Macro Asilo in Rome was created in collaboration with the designer Fabio Bronda.

Nuvola inside the “Nuvola” conference center in Rome during the Forum PA, installation commissioned by Ministry of Finance

A paradigm shift: from sentiment analysis to Emotion AI, from analysis to emotion. During the workshop dedicated to our Nuvola Reloaded, at the Faculty of Architecture of the La Sapienza University of Rome, we presented our project between Interaction Design and Interactive Art

For the SoftScience 2021 project, in collaboration with UrbanExperience, we have created a small engine for sentiment analysis and connected our clouds to it. You can try out research on any topic (in English however) and the result will color our physical Clouds based on the sentiment detected. During the event, the Clouds will be physically present to show this “connection” live.

Here is the link: https://softscience.nuvolaproject.cloud 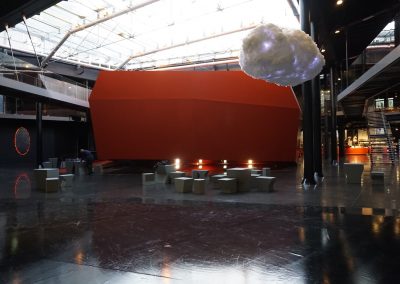 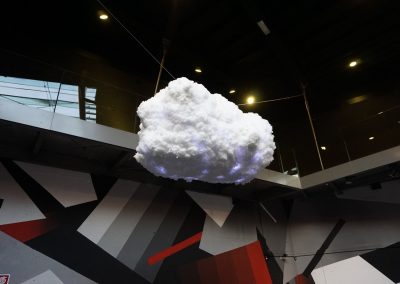 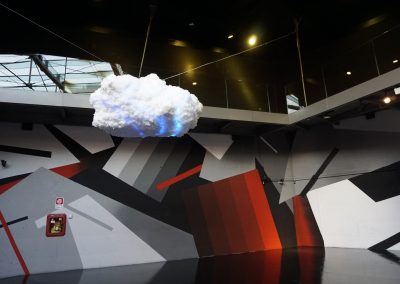 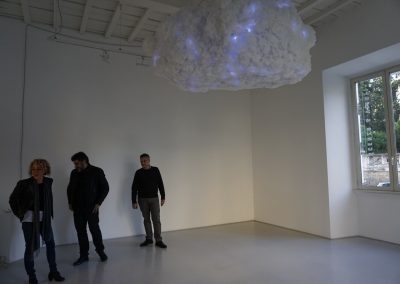 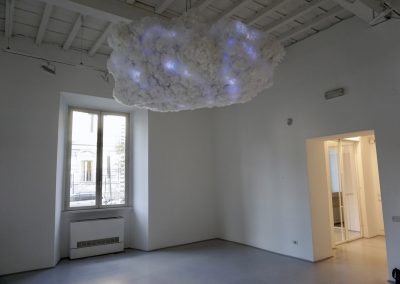 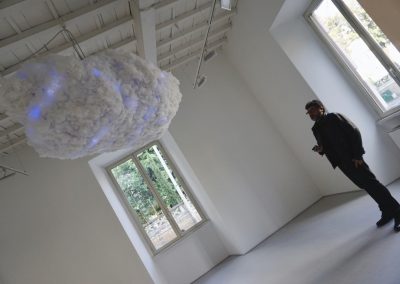 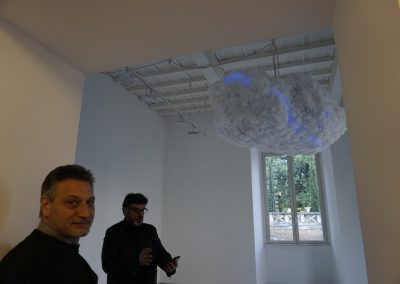 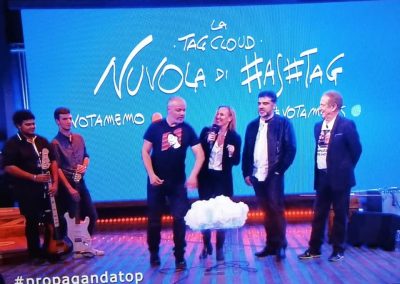 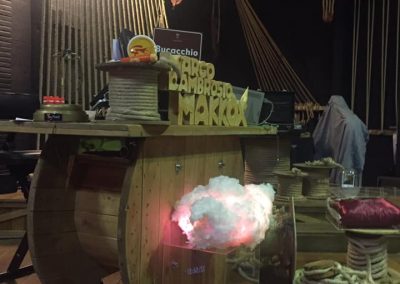 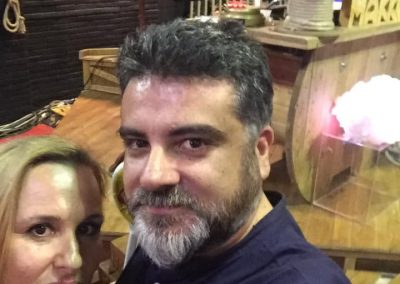 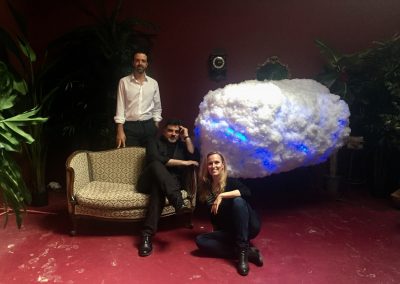 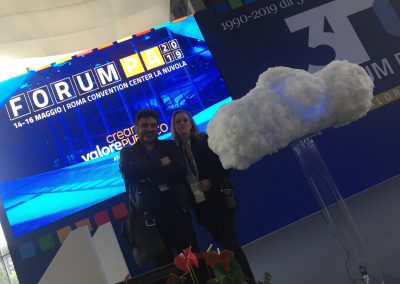 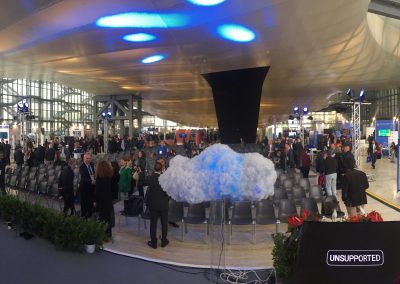