The third edition of “Paesaggi Umani”, a project created by UrbanExperience, winner of the Contemporaneamente Roma 2020-2021-2022 Public Notice, curated by the Cultural Activities Department and carried out in collaboration with SIAE, ended a few days ago.
The project was designed to explore the relationship between citizenship and education, and took place in different areas of the city of Rome, from Esquilino to the Accademia di Belle Arti in Tordinona.
During the events that took place between 21 and 27 November, which involved, among others, students from the Department of Education Sciences at the University of Rome Three, the Accademia delle Belle Arti, the Department of Planning Design and Technology of Architecture at Sapienza-University of Rome, stories were told that offered the opportunity to discover the city in a new way.

The project, itinerant, took place in Rome in walkabouts led by Carlo Infante. The radio walked (both in local mode, with radio headphones, and in global mode, with web radio streaming) and gave rhythm to the participatory explorations, then leaving georeferenced traces on a speaking map. On this map, users could listen to the voices of the protagonists in the territories, both on the web radio (radiowalkabout.it) and on the Loquis app with geopodcasts.

During this edition of Paesaggi Umani, stories were told from the Roman geography, such as those of Ernesto Nathan and the alphabetical Garibaldini, Paolo Ramundo, Lucrezia Romana, Sixtus V, Raffaele Fabretti, Christina of Sweden and Don Sardelli.

The appointments of this edition included talks on “Performing Media to distill Paesaggi Umani”, experience labs and walkabouts, such as “Meta Hodos (method): through the path, knowing by walking among the human landscapes” and “The Bird that cultivates the earth: the epic of Paolo Ramundo from ’68 to social agriculture”.

Among these, we would like to highlight the events that saw NuvolaProject as the protagonist and animator of meetings on the themes of culture, technology and relationship with new media and the most innovative tools such as Artificial Intelligence and Augmented Reality. In particular, the meeting at the “Tomo” bookstore in San Lorenzo, with the talk “Performing Media to distill Paesaggi Umani”, where Massimo Di Leo and Gaia Riposati talked about the book “Performing Media – a remote future” written on and with Carlo Infante.

NuvolaProject’s performing portraits were also featured in two events. In the first, with students from the Department of Planning Design and Technology of Architecture at Sapienza University of Rome, held in the cloister of San Salvatore in Lauro, the portraits of Christina of Sweden, Sixtus V and Raffaele Fabretti were projected, made performative by acting work and processes of artificial intelligence.
In the second, on the occasion of the International Day against Violence against Women, at the Archaeological Park of the Appia Antica with the director Simone Quilici, the work on the character of Lucrezia Romana and her portrait, painted by Cranach the Elder, animated by the acting performance of Gaia Riposati with the words of the poem written by William Shakespeare and by different algorithms of Artificial Intelligence was proposed again. On this occasion, it was also chosen to leave a permanent mark, a “talking signal” a sign that allows to see in augmented reality the video of the performance. 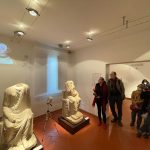 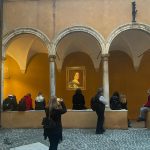 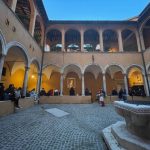