For the third consecutive year NuvolaProject participated in the Performing Media! project Organized by Urban Explorer for Estate Romana.

We have a long story of collaboration with Urban Experience and Carlo Infante. Many of the performances and installations we have made over the years have been born on the occasion of events organized together.

Performing Media! is one of the most interesting projects that has seen us involved for as many as three consecutive editions. The project is based on the concept of “performing media”, which Carlo Infante himself has been distilling for several years and which we wrote about, together with him, in a book recently published “Performing Media – a remote future” which we will talk about later.
For its third edition from September 25th to 30th 2022, as part of Estate Romana 2022, the project has developed into a theoretical and experiential, playful and participatory reconnaissance, based on the “learning everywhere” concept, through walkabouts (radionomadic participatory explorations) conducted by Carlo Infante and a series of performances and installations.

This year we have brought our touch between performance, digital and artificial intelligence, through time and space until we cross the boundaries between the real world and that immaterial alternative condition that we call the metaverse.

For the first actions we animated night walks on the basement of the ancient Via Appia in Rome, during which, with the complicit assistance of the performer Simona Verrusio and his cyber-mythological character VJ Janus, we projected along the way, on the remains of ancient vestiges of mausoleums and Roman tombs, epigraphs, images and we have summoned mystical figures such as sibyls and pizie to tell a part of the millennial history of which those stones have witnessed.

We presented, for the first time, digital works made for our ‘Art Prophecies’ project, also in NFT. The technique is the one we used to create works such as “The Portrait of Christina” and Lucrezia Romana (the latter also presented for the first time right at Capo di Bove, headquarters of the archaeological park of the Appia Antica) this time applied to a series of figures of priestesses and pizie portrayed in important art masterpieces, from Guercino to Raphael, from Rossetti to Collier to Michelangelo. They are all female figures united by the practice of divinatory arts, powerful and central figures in the social and religious life of Greek and Roman world. We choose the ancient Greek and Latin to make them speak, with the original words and texts of ancient prophecies, thanks to the advice of the historian Eleonora Sandrelli and the art historian Leonardo Catalano. We started once again from an acting performance by Gaia Riposati and then we used several Artificial Intelligence algorithms to animate the works, achieving a strong and impressive visual result.

As well as the figure of Lucrezia Romana (a work we started a year ago on the occasion of the second edition of this same three-year project) was a very powerful evocation of a black and little remembered tale of Roman history. Lucrezia Romana is in fact a key character to the history that could, according to the story told by Tito Livio, even have accelerated the transition from the monarchy to the republic. Collatino’s wife would in fact have been raped by the son of the then king, of Etruscan lineage, Tarquinius the Superb. With an act of pride and courage she would have endured the shame to be able to tell her husband what she had suffered, before taking her own life in front of his eyes. The indignation of the Roman people, when the news spread, would have led to the riots that dethroned the last king and led to the establishment of the new Roman Republic.
This story, long forgotten or at least little represented for centuries, is rediscovered in the ‘500 and in particular two artists produce two masterpieces on this subject. Two very different works, one in fact is a painting, by Cranach the Elder, the other is a small poem written by William Shakespeare. The two works were created a few years later, but it took over 5 centuries to bring them together in an intense and very powerful work, a digital animation that used the visual force of the painting of Cranach and the verses of the Bardo, through once again the extraordinary acting performance of Gaia Riposati and the power of artificial intelligence algorithms, to bring back to life the figure of Lucrezia Romana who was finally able to tell her story in front of an audience, on the same streets and on the symbolic walls of that world that saw those facts happen.

Once again creativity, imagination and a touch of digital art have allowed us to bend time and take the audience to experience, a powerful and unique journey, to meet characters painted centuries before and told millennia ago, they have seen them animate and talk, to open temporal tunnels, between art, storytelling and History, projected on those stones that have seen them probably move.

At the Appia Antica Archaeological Park there was an Experience-lab with brainstorming and walkabout on The Art of the Spectator. The new value network, between active participation and blockchain together with Communia-Rete for the Common Assets and WREP Media Company.

We have presented the results of our workshop for Carlo Infante’s course on Performing Media as part of the master’s degree course in Visual Communication and Multimedia Design of Prof. Luca Ruzza in the Planning, Design, Technology Department of Architecture of the University of Rome Sapienza. In this course we have foreseen as a result, perhaps for the first time in an Italian university course, the production of an NFT artifact. An opportunity to introduce students to these themes by addressing them from a more complex and less playful and superficial point of view than the one to which the common perception relegates this technology, challenging them to unleash creativity and imagination, to understand the possible developments and implications that new technologies of the web 3.0 can bring in the near future and that will have a strong impact on their field of work

The meeting continued with interventions, among others, by Igor Scaglioli and Giorgio Filosto of WREP and Maurizio Crocco.

But there was still a journey to go, this time not temporal, but dimensional. Cross the physical, real dimension and enter the impalpable and virtual dimension of the metaverse.

In a meeting held at the National Academy of Dance, in Rome, there was a talk about dematerialization of the performance. Ariella Vidach and Claudio Prati of AiEP gave a demonstration of how the body, thanks to now established techniques such as motion capture, here thanks to a kynect system, can animate an incorporeal avatar, transporting actions from the physical world to the virtual one.
NuvolaProject instead addressed the topic of how to carry words, emotions and intentions into the metaverse. From Incorporeal substance to incorporeal dimension.
Using our Nuvola installation, here in digital version, and a touch of artificial intelligence, we continued the work on those “sensitive environments” already investigated for over 40 years, but which until very recently was limited to “sensitivity” or the ability to perceive the presence and physical actions, through the use of sensors, thus able to “feel” the presence of man. Now, however, we want to bring that term ‘sensible’ closer to the Anglo-Saxon ‘sensitive’, a broader meaning, more like our ‘conscious’. Interactive installations able not only to ‘feel’ but somehow ‘understand’. This allows us to interact not only with the physicality of the body or the sounds emitted, but also with the incorporeal concepts such as “intentions” and “emotions”, analyzed by AI systems and transported into the metaverse translated into reactions and actions of avatars and digital objects.
This is what happened during the performance, which once again saw Gaia Riposati as the protagonist, whose voice, emotions and intentions were captured, received and, as far as possible, understood by algorithms that then distilled in the form of animations of lights and colors, the direct reactions to the emotions detected.
It is not magic but algorithms from that branch of Artificial Intelligence called Natural Language Processing (NLP), the ability of these synthetic systems to understand natural speech, in particular we have used a process of Sentiment Analysis, or the detection of emotions from the spoken text. Usually done on big data to extract statistical information, we did it on speech in real time, thus getting an almost instantaneous reaction to the feeling that the machine perceived listening to the text performed. This allows us to create a digital choreography, in which sounds, colors, animations and clouds of words, move and react to the human on stage. In a more balanced exchange of collaboration, thus becoming not mere tools, but protagonists of scenic action. This is a project/concept that we have been working on for years, from the first experiments done at the Sapienza University in Rome, to other more recent events. 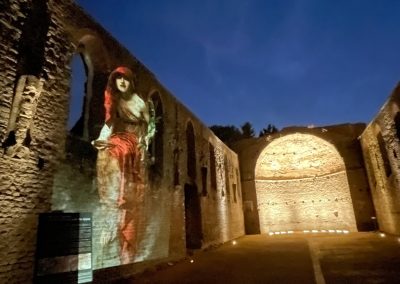 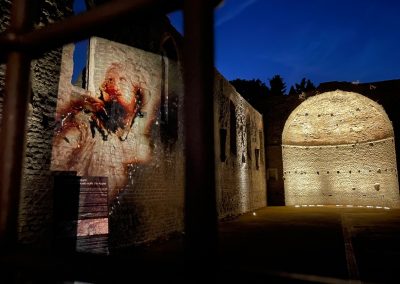 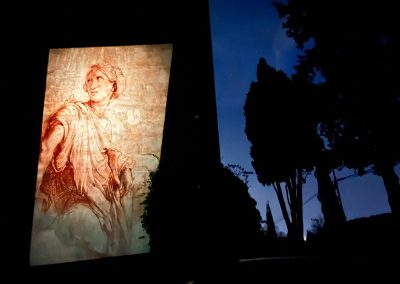 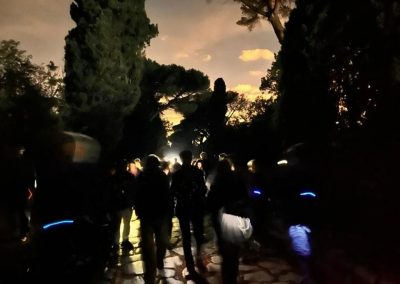 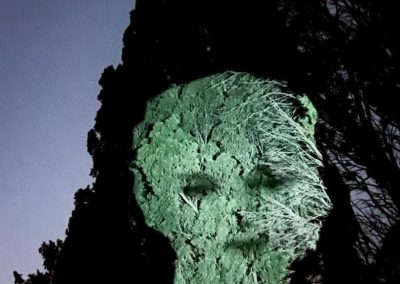 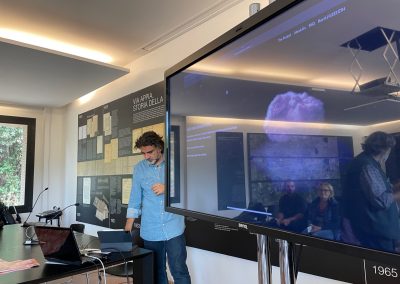 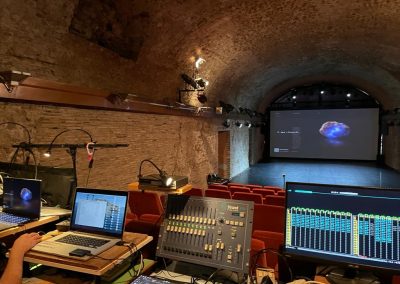